The Carson Route of the California Trail - Late May 2020

All of us have been impacted by the worldwide coronavirus pandemic. That's not news, is it? We, like most of you, have been abiding by the Stay at Home orders to slow the spread of the disease, not just to protect ourselves but to protect others. No non essential travel was the rule to follow. We felt we were all in this together. How naive we were.


We live on the edge of one of California's busiest - recreation wise - National Forests. Our community was soon inundated with tourists coming through, most disregarding face masks, social distancing, and non essential travel. Yeah, we did our best to tone down our outrage, be good neighbors, be good citizens. Most all the visitors we saw streaming through were only out for themselves. Armed with rationalizations and personal justifications and no concept of the greater good, the hordes rushed in. And since many were not working, it was a daily event. Every day looked like a weekend. El Dorado County closed the Lake Tahoe basin area of the county to all non essential visitors. The rest of us El Dorado County residents felt like we were thrown under the bus.  We felt like the lab rats, the canaries in the mines. As the restrictions began to be lifted, what was expected in regards to travel became even less clear. I jokingly considered creating and selling "2020 State of Confusion Tour" t-shirts.


The only thing that was clear to us was our need to double down on all the safety protocols to protect ourselves and the ones we care about.


In late May, after Memorial Day we took our first short drive away from home. With our knowledge of the area it's easy for us to leave the tourists. We live along the famed California Emigrant Trail, the overland route into California's Gold Rush of 1849. A group - Trails West - has worked on erecting markers along the historic route. What fun it would be for us to find several trail markers close to home! 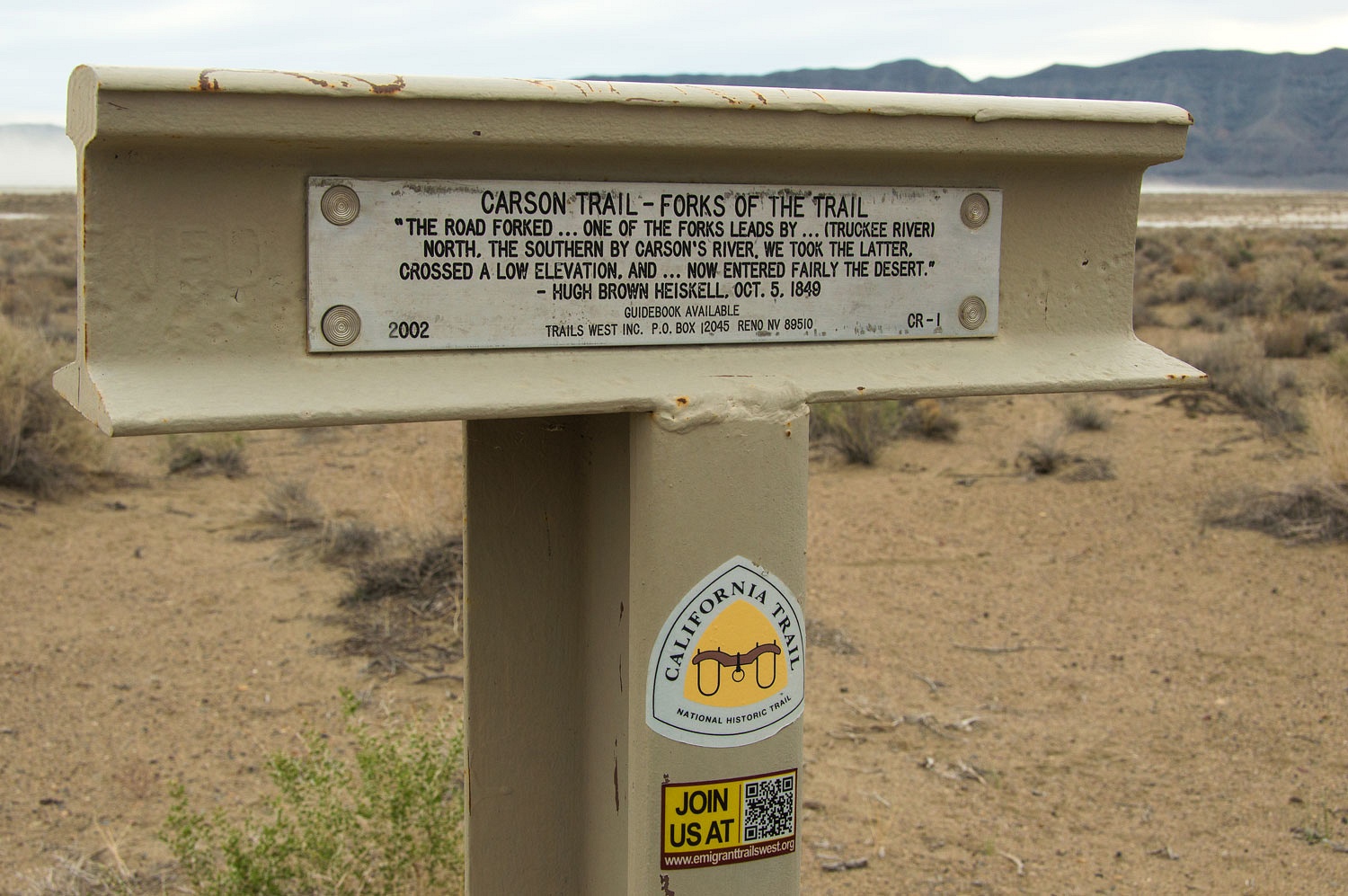 The Carson Route reached the highest point of any emigrant wagon route in the United States - West Pass. 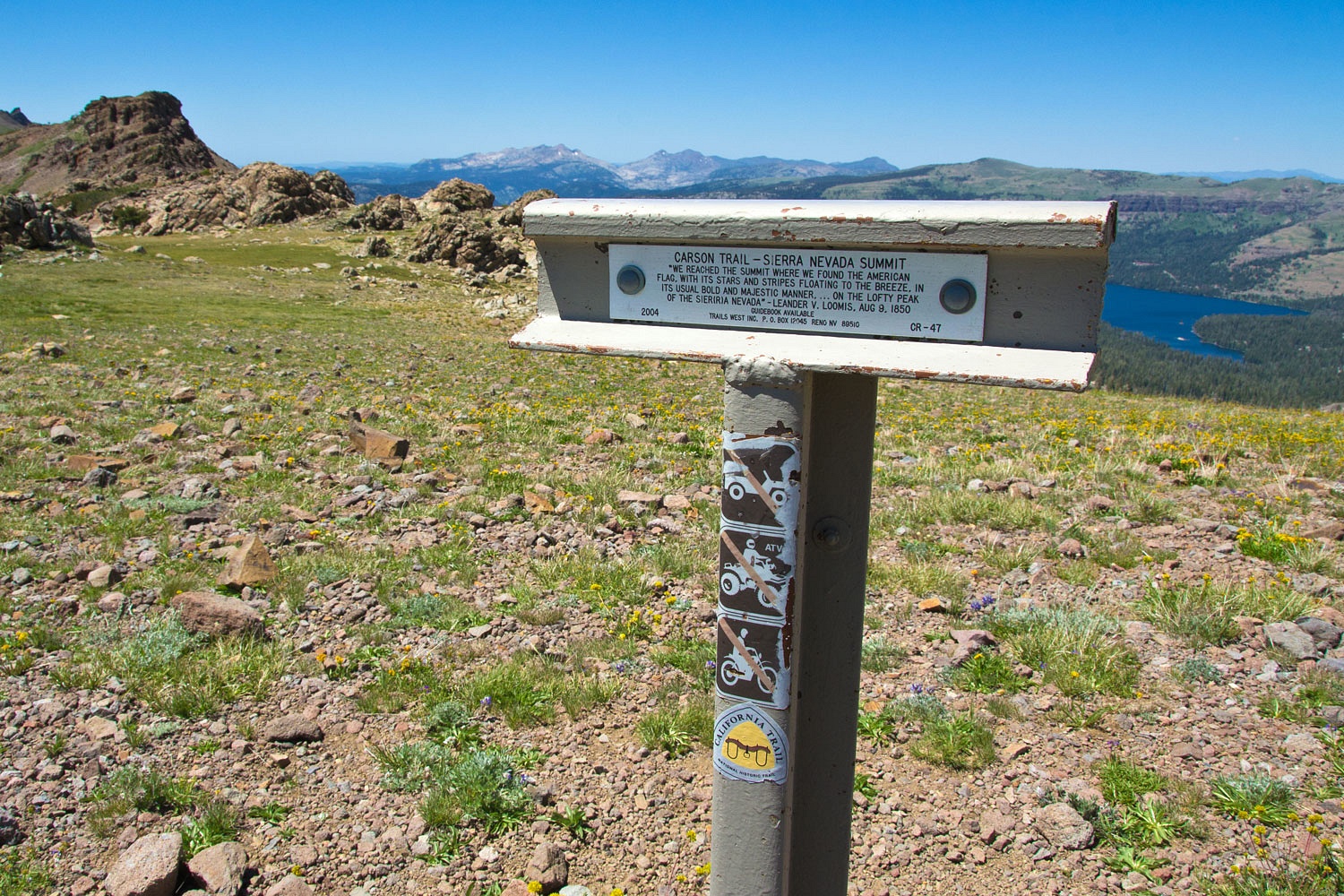 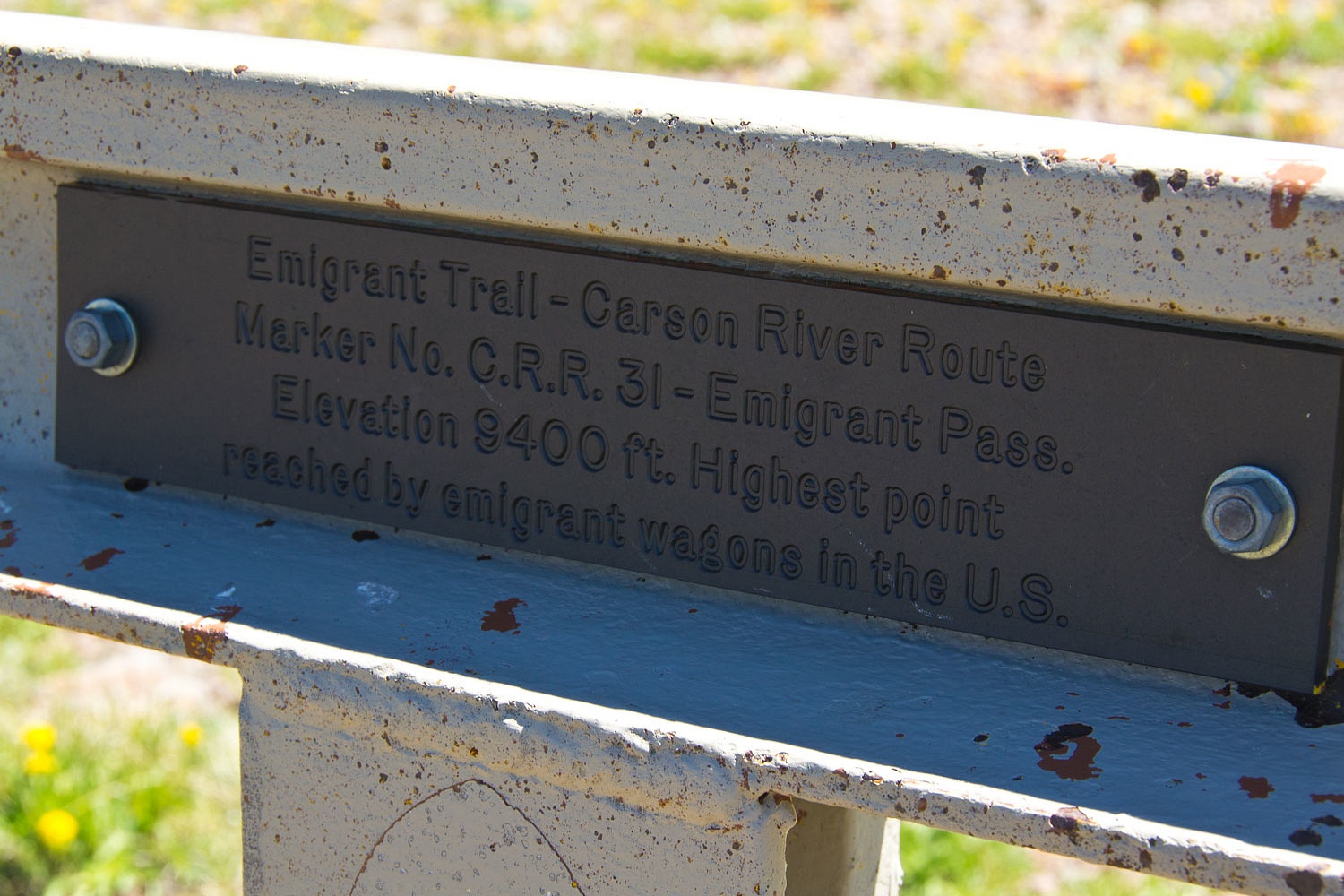 We have been up on West pass many times, yup, even in winter on skis.

From West Pass the trail descends Squaw Ridge. Last October we hiked and visited the site of an old trading post and also two grave sites on Squaw Ridge. 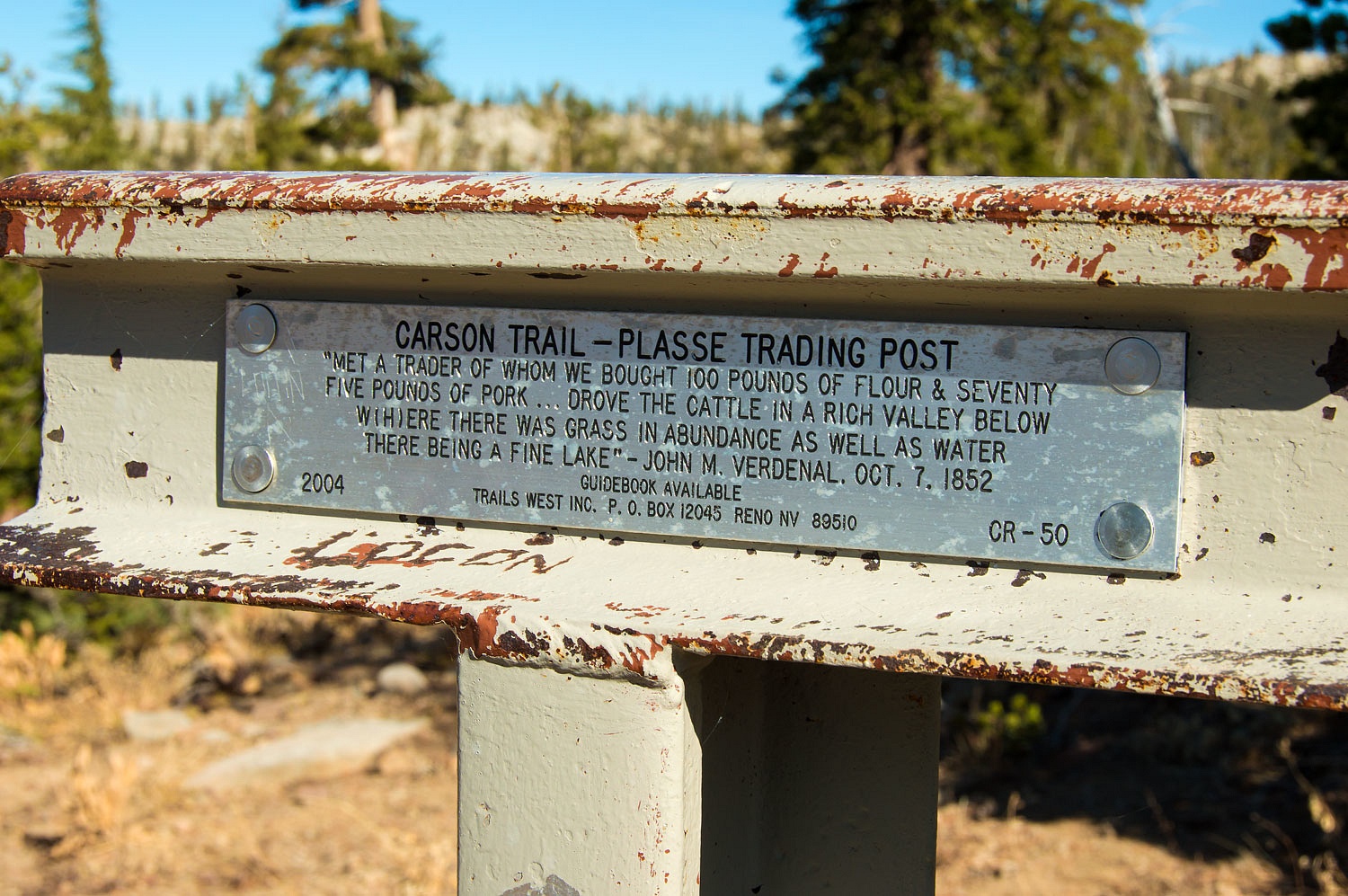 The trail moves over onto Iron Mountain Ridge west of Tragedy Spring.

For our late in May short afternoon trip we drove out Iron Mountain Road and started our adventure with the marker placed at Leek Springs. 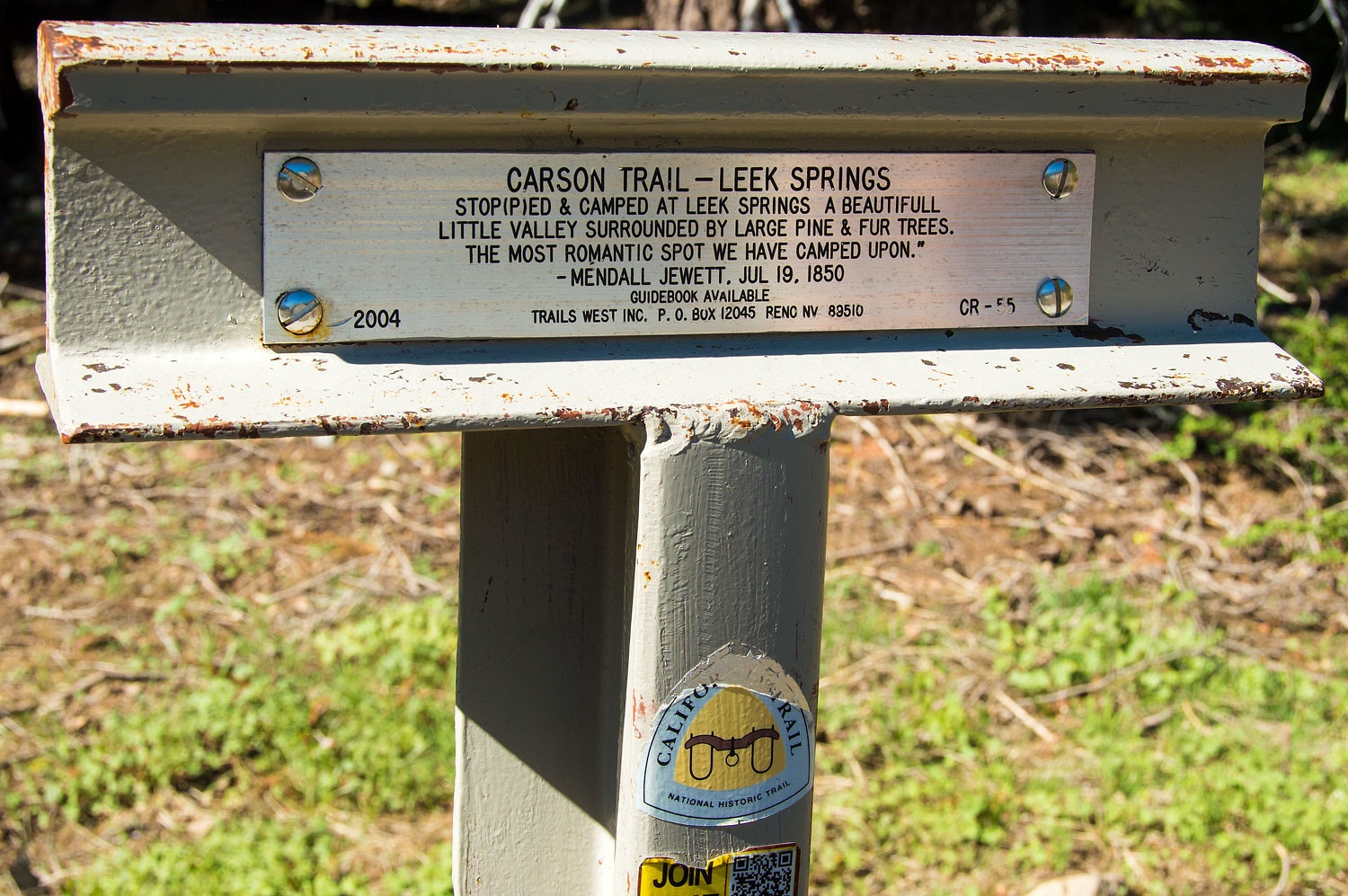 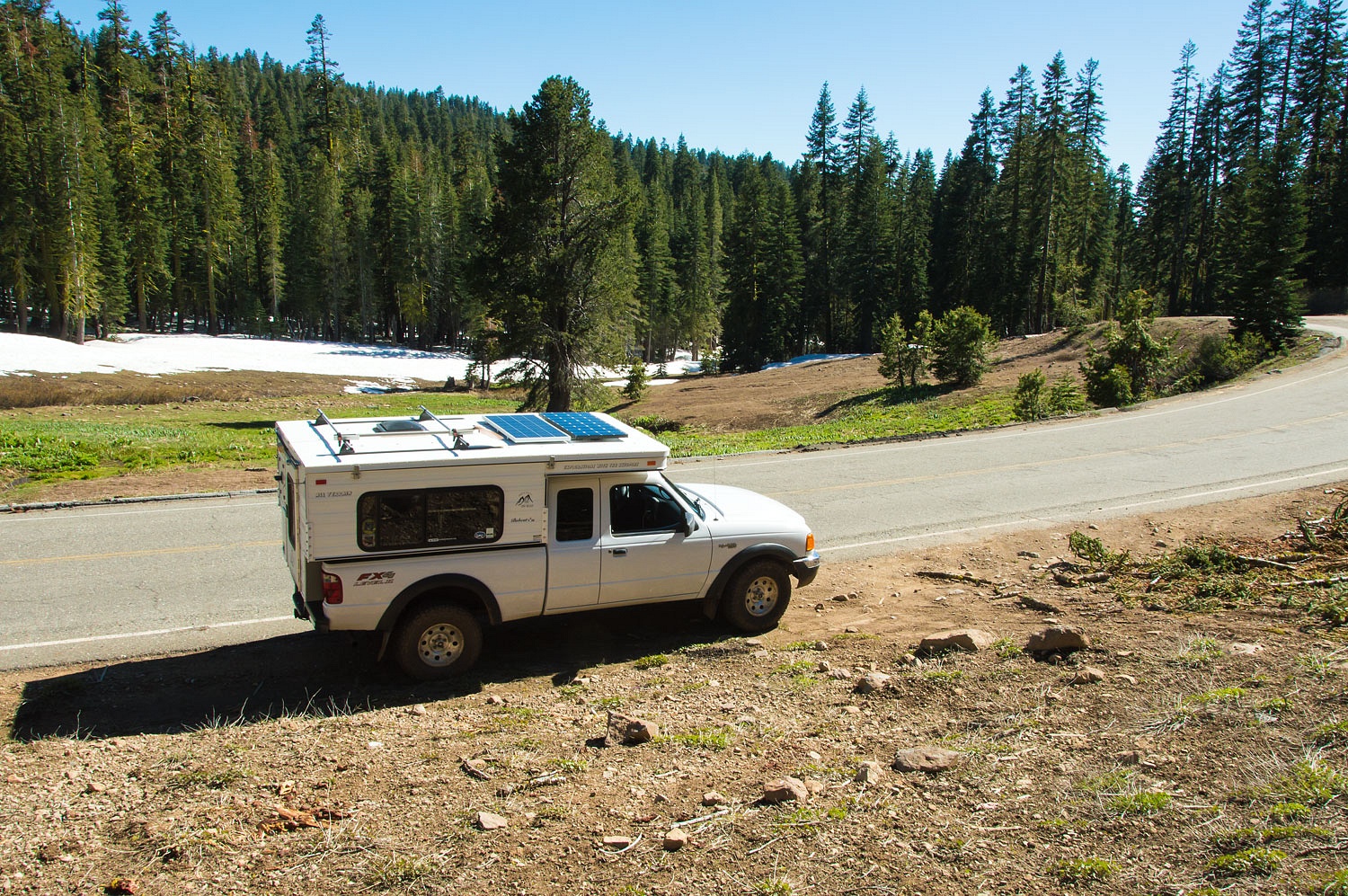 Leek Springs is also the beginning of a later spur wagon road down to Grizzly Flats. 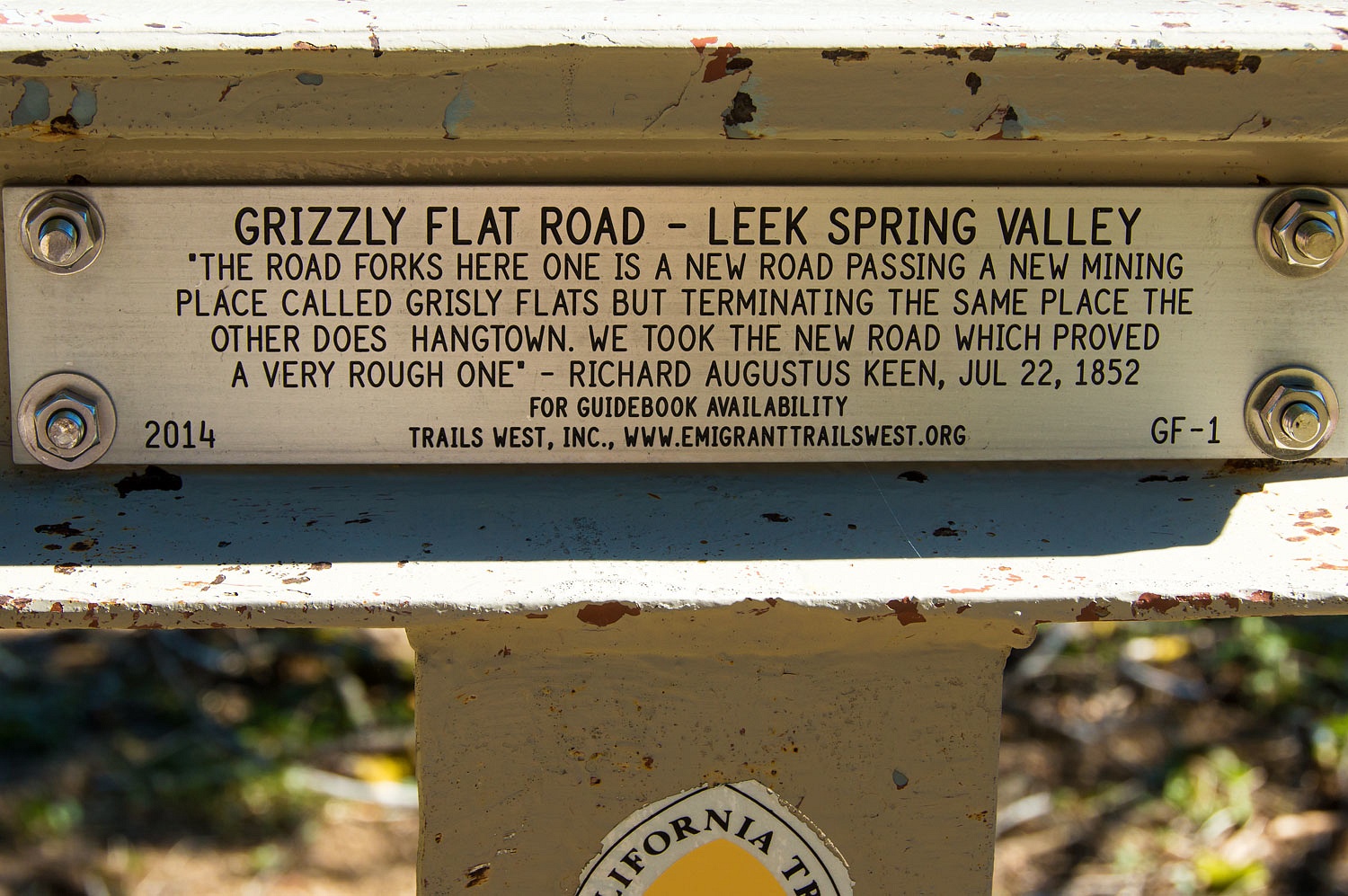 We turned around and found trail markers on our downhill return to home. 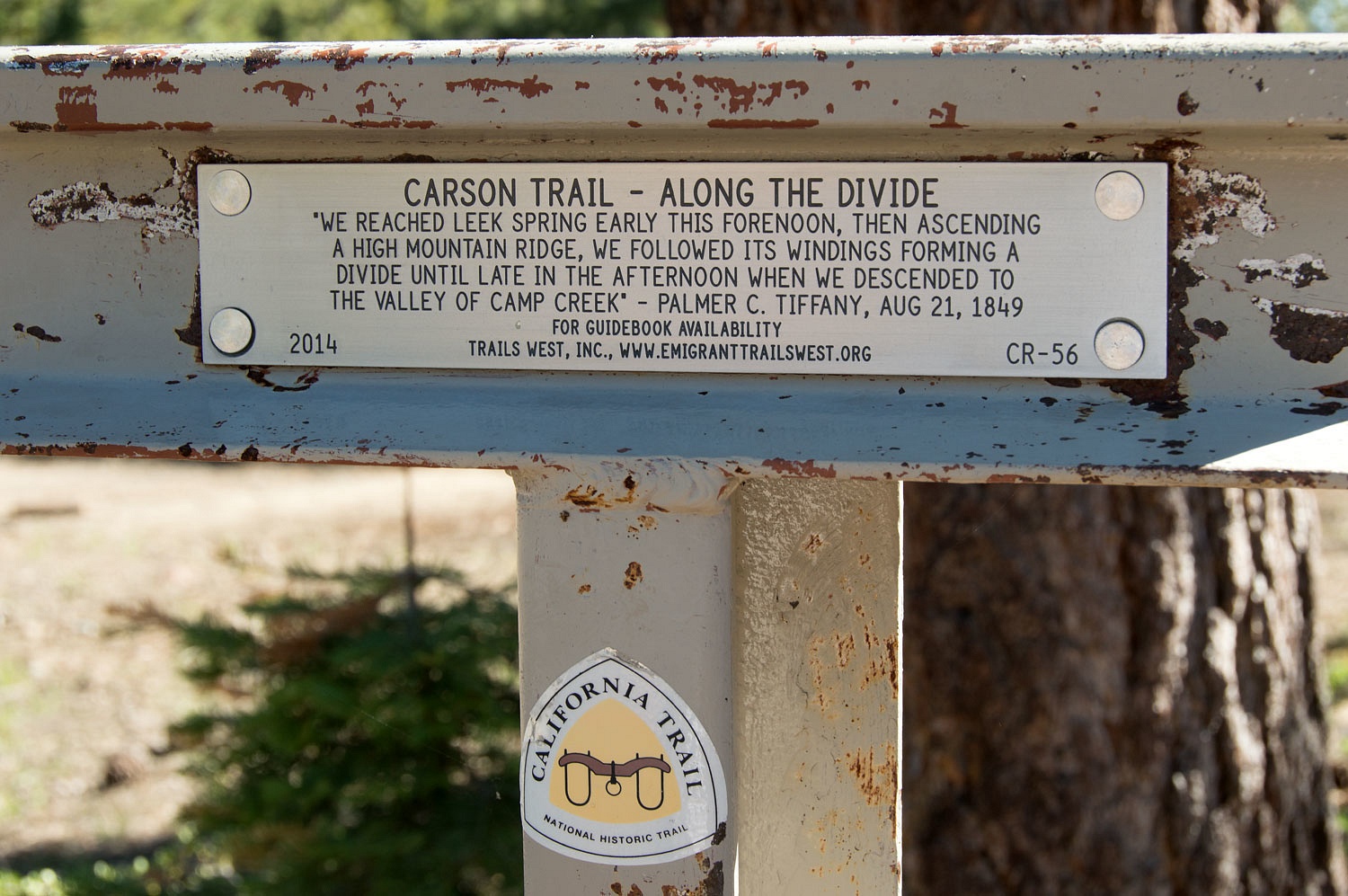 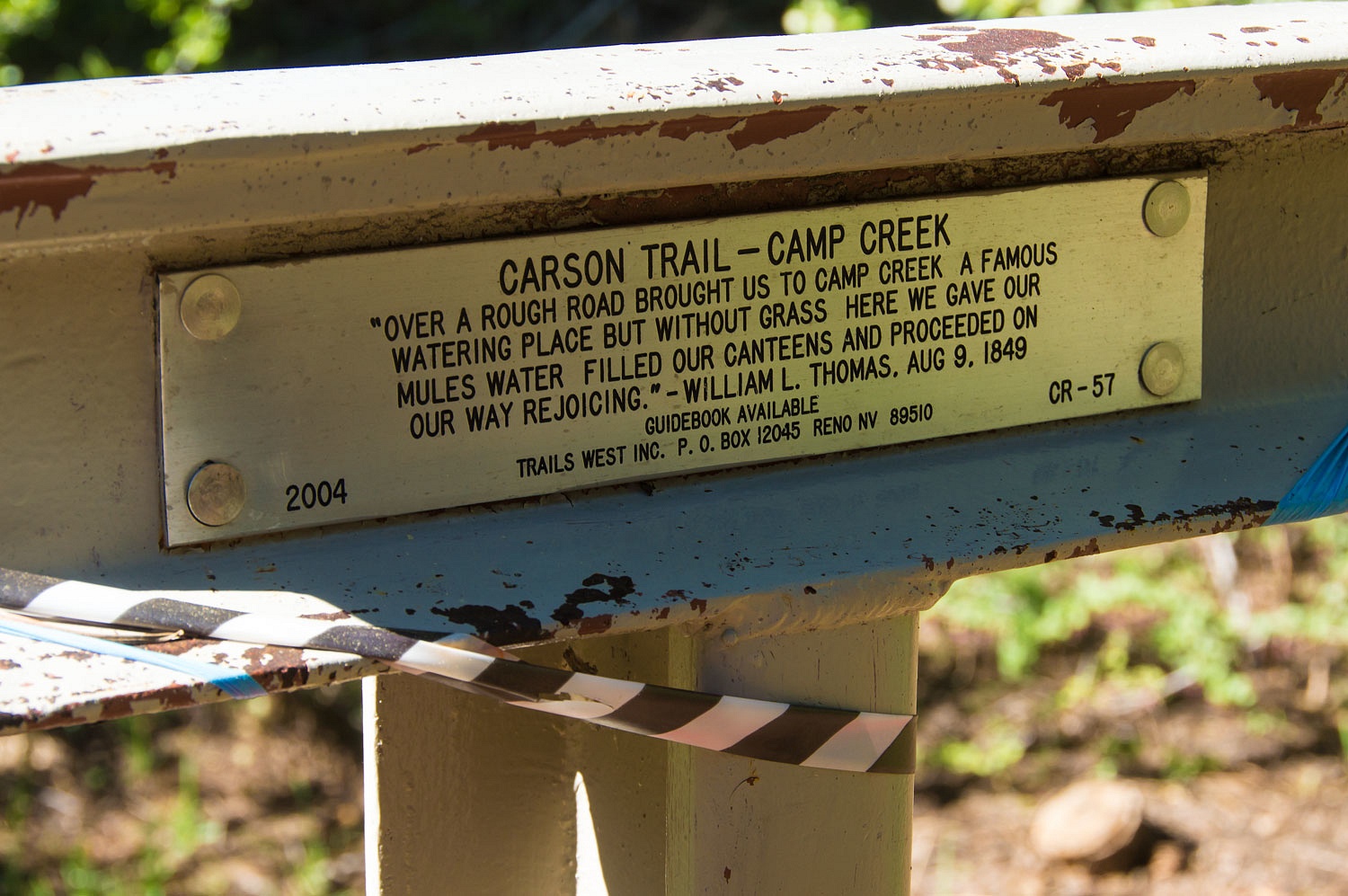 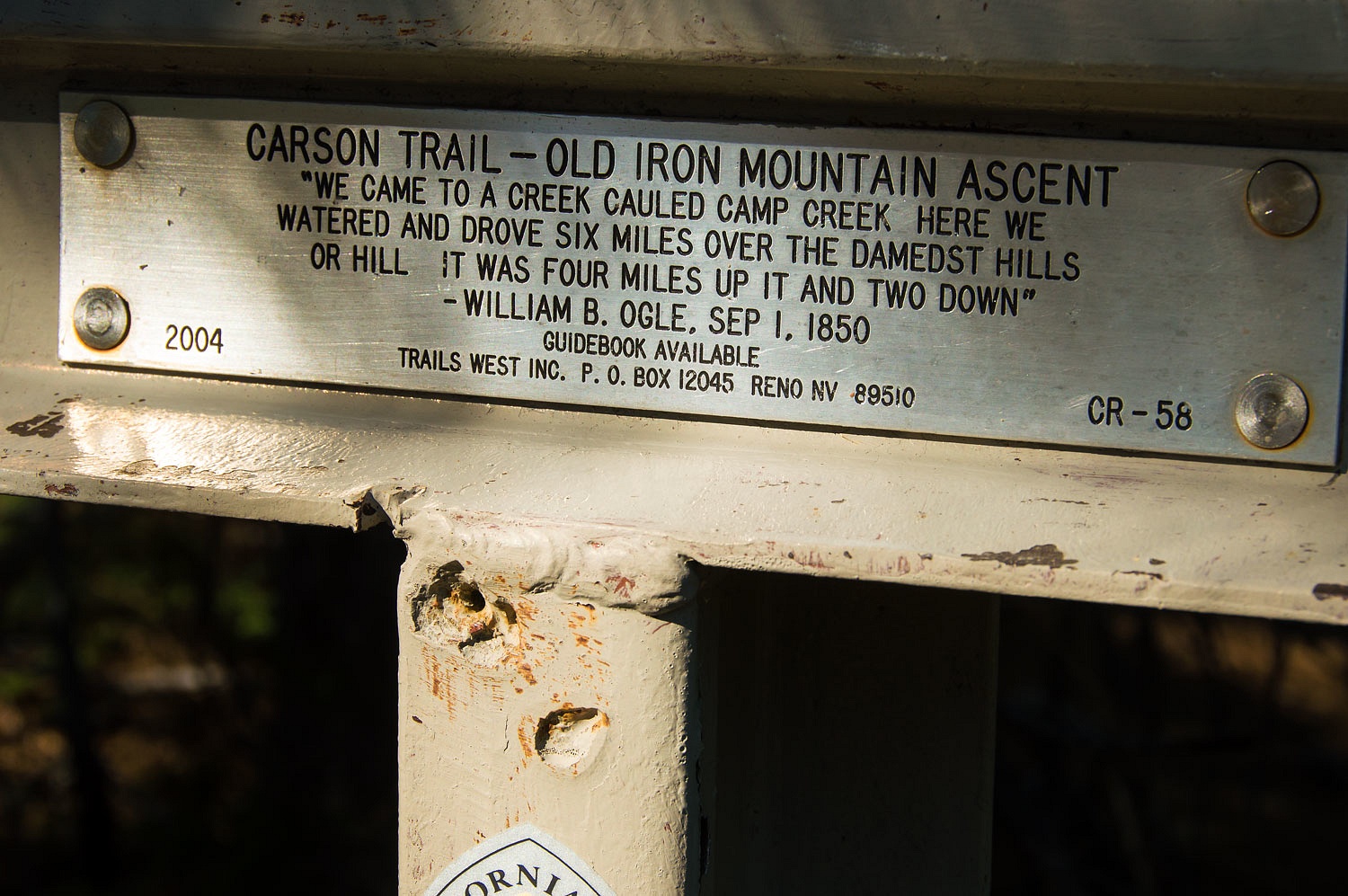 A large ponderosa pine stands at the spot. It was called the 49er Tree. 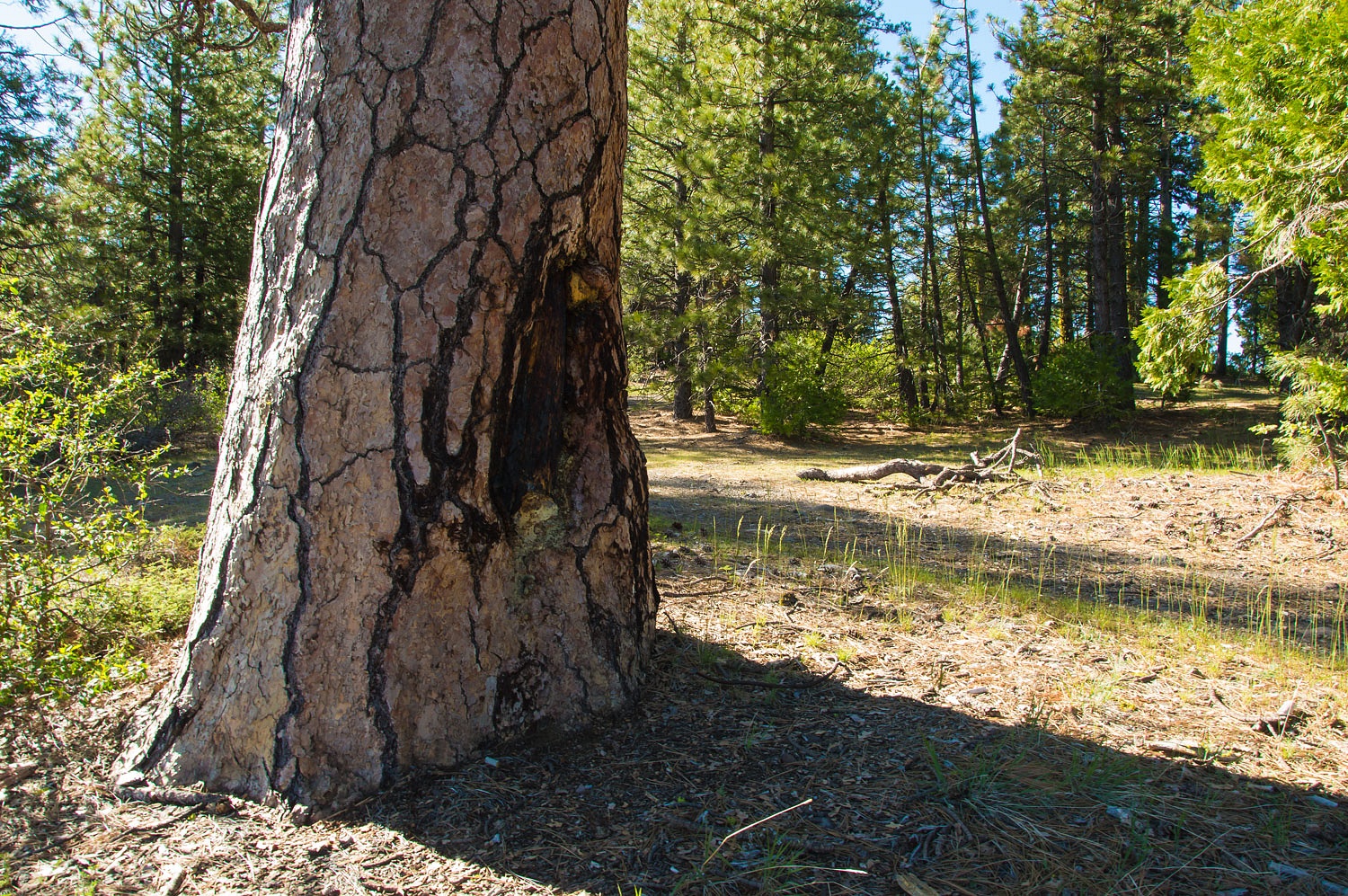 There was an emigrant road inscription carved into its base. In the late 1970's it was doused with gasoline and set on fire, a senseless criminal act of vandalism. I remember reading of the desecration in our local paper at the time. I have not, yet, been successful in finding that old article. The fire scars are still visible and very few now remember the 49er Tree.

We needed to hike to reach the next trail marker as we would cross private forest land with a locked gate. It was an easy two miles one way. The private road we followed took us out to the north ridge off of Old Iron Mountain - the long green timbered ridge that runs left to right in the midsection of the photo below. 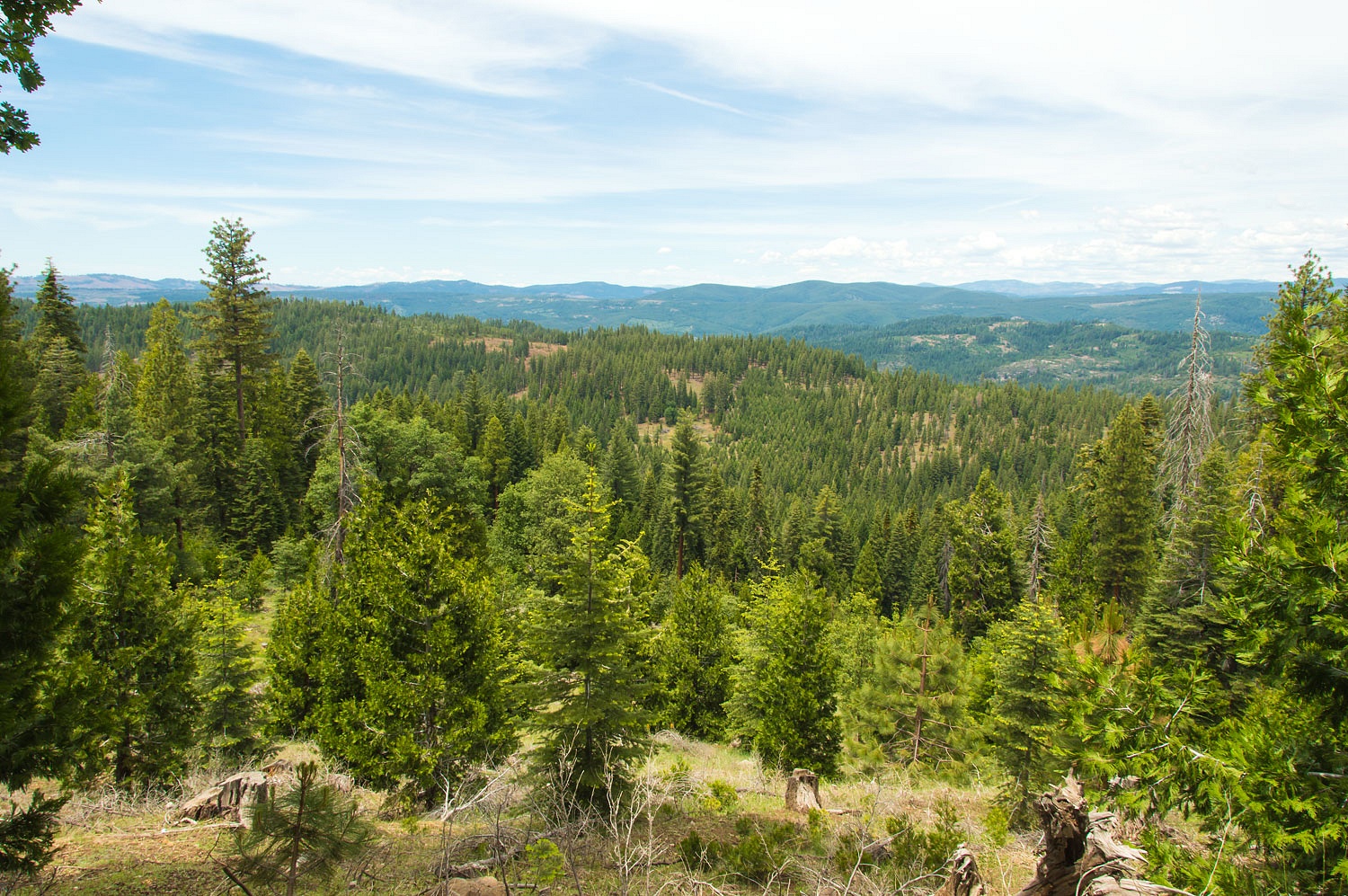 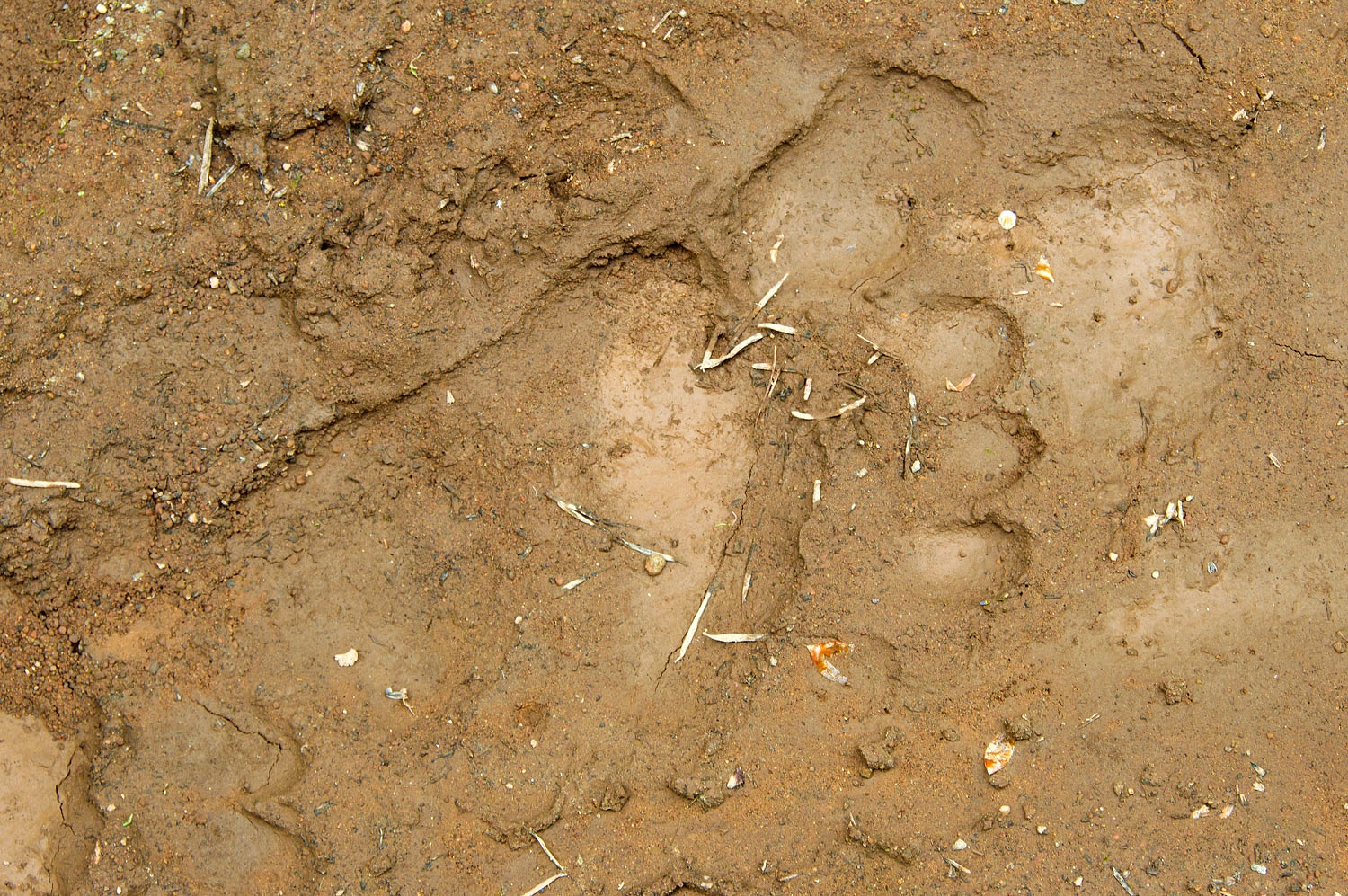 The flowers were beautiful along our hike with pussy paws, the last of the dogwoods, and mariposa lilies. 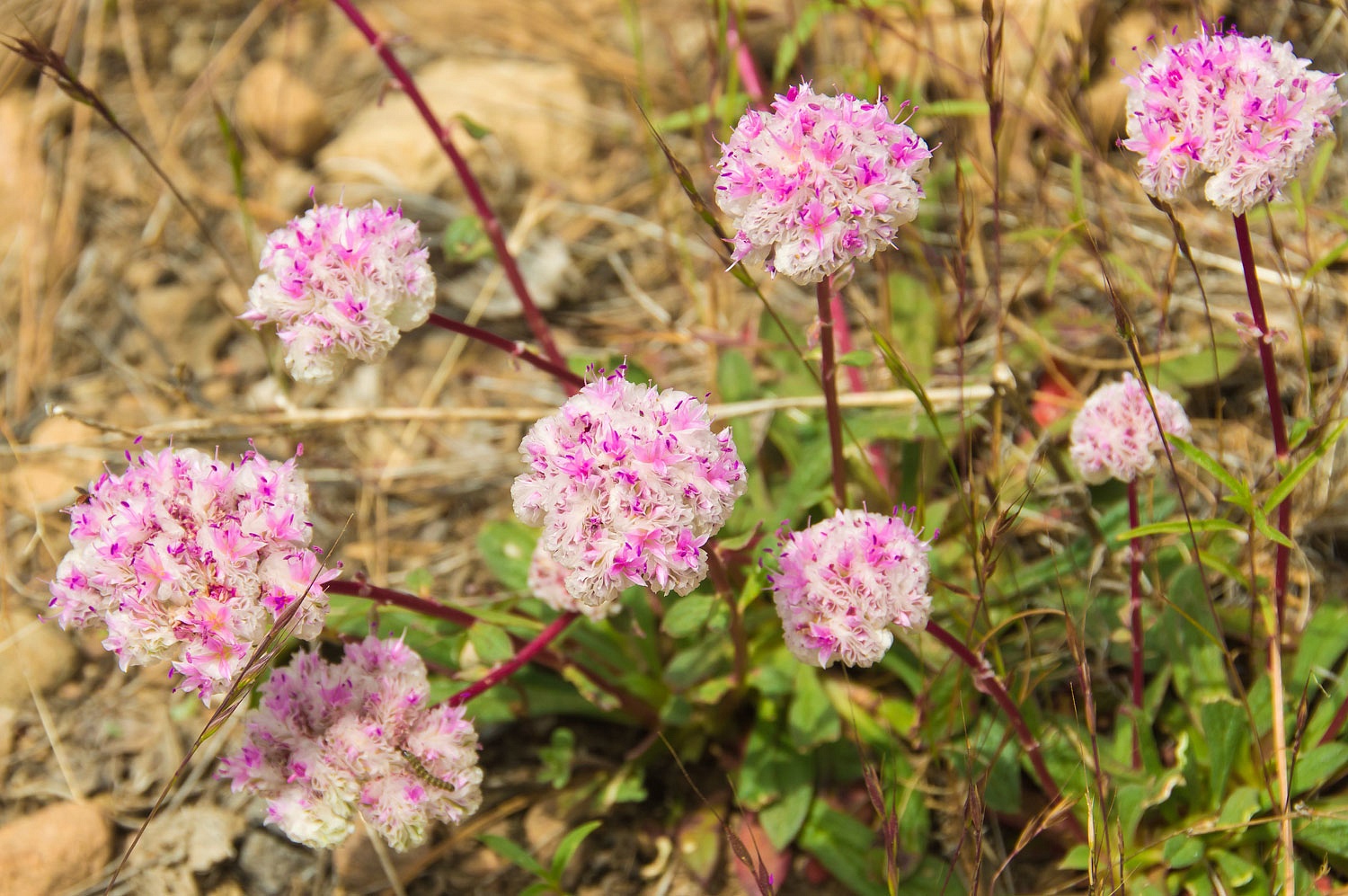 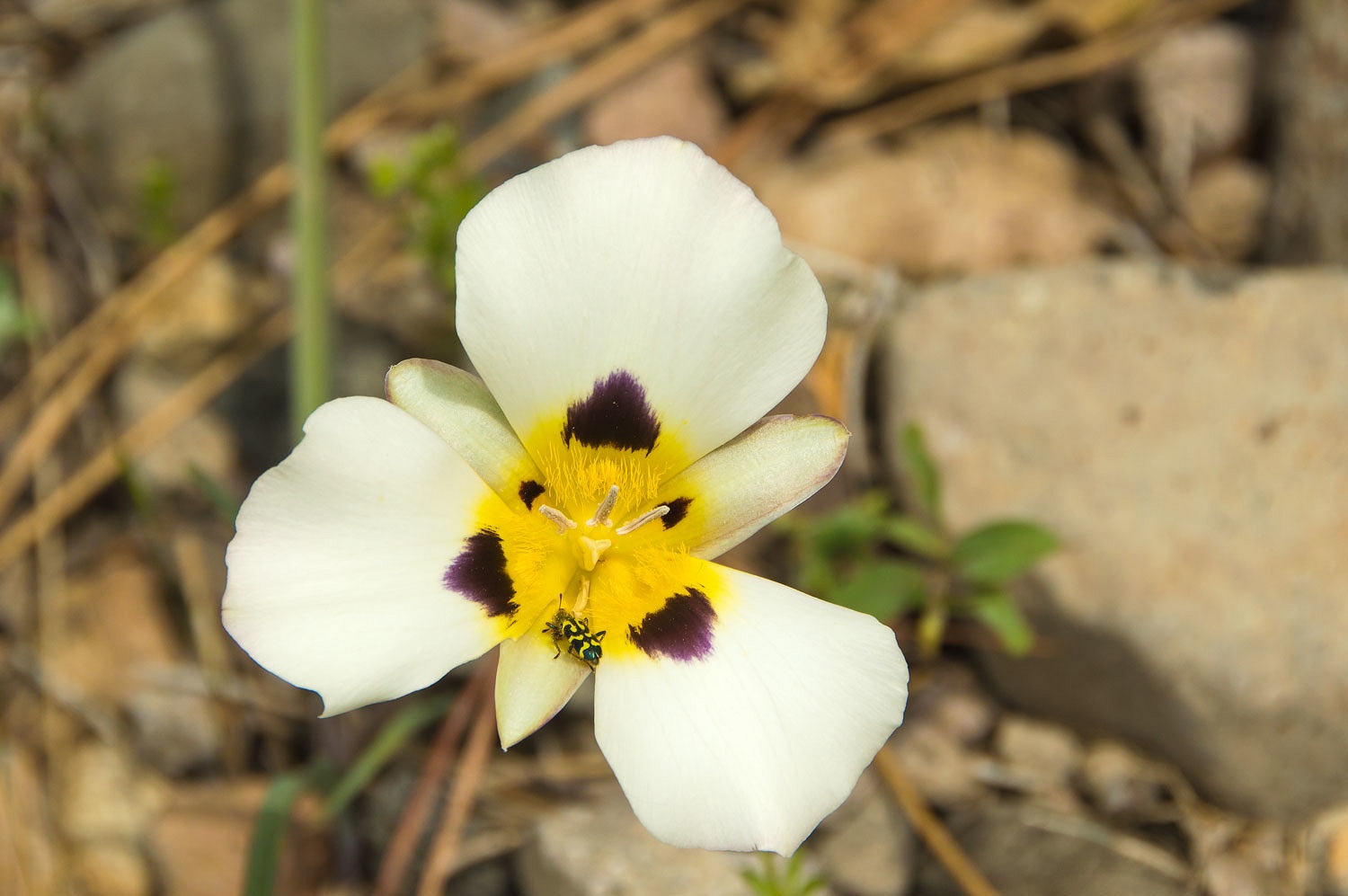 On a saddle in the ridge below Old Iron Mountain, we found the marker. This is the route continuing on the ridge toward Placerville. 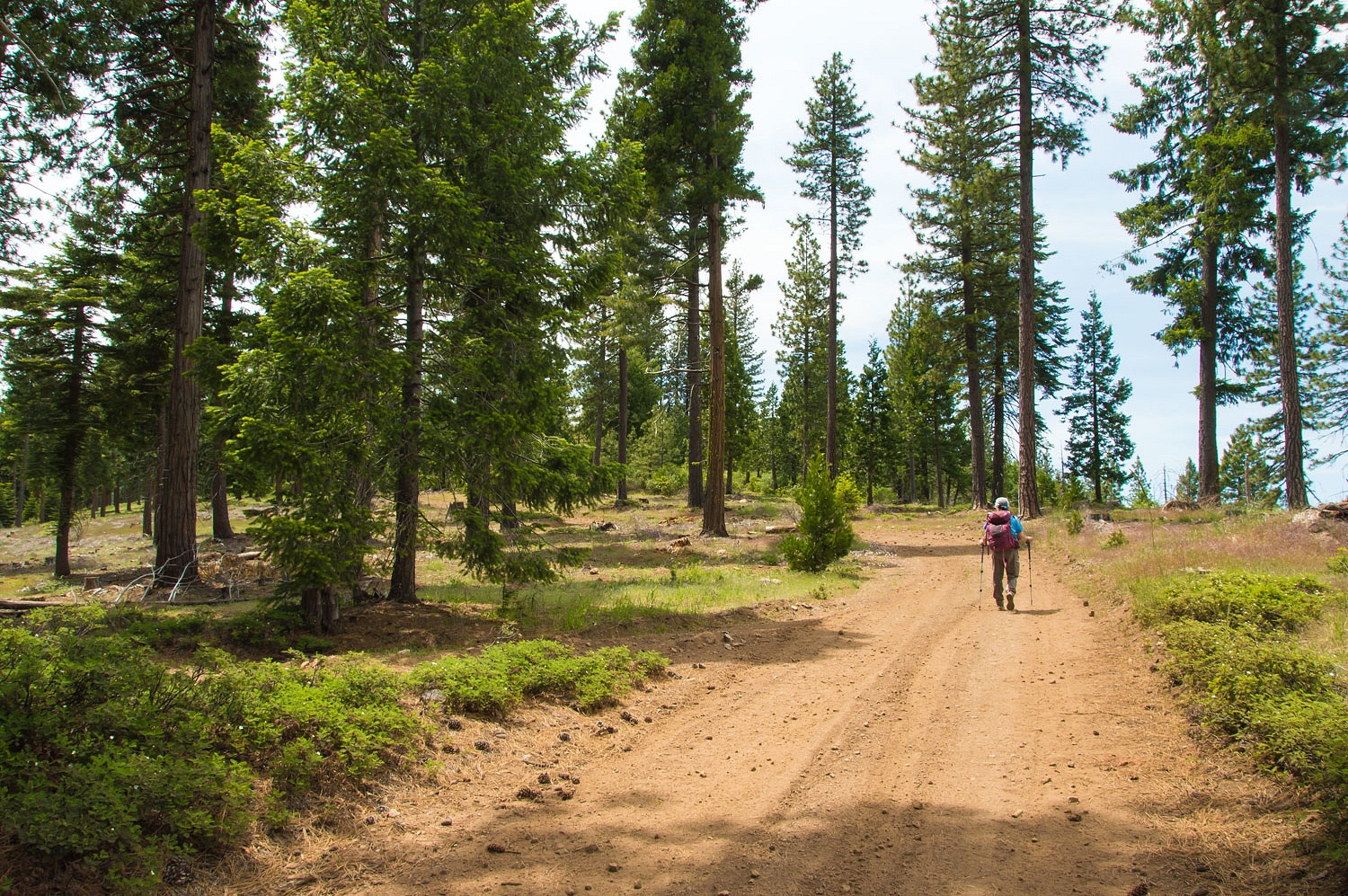 We enjoyed the few glimpses we got of the Crystal Range. We hiked back to our truck and returned almost to home and drove out an old dirt road that is the remnant of the old Carson Route. 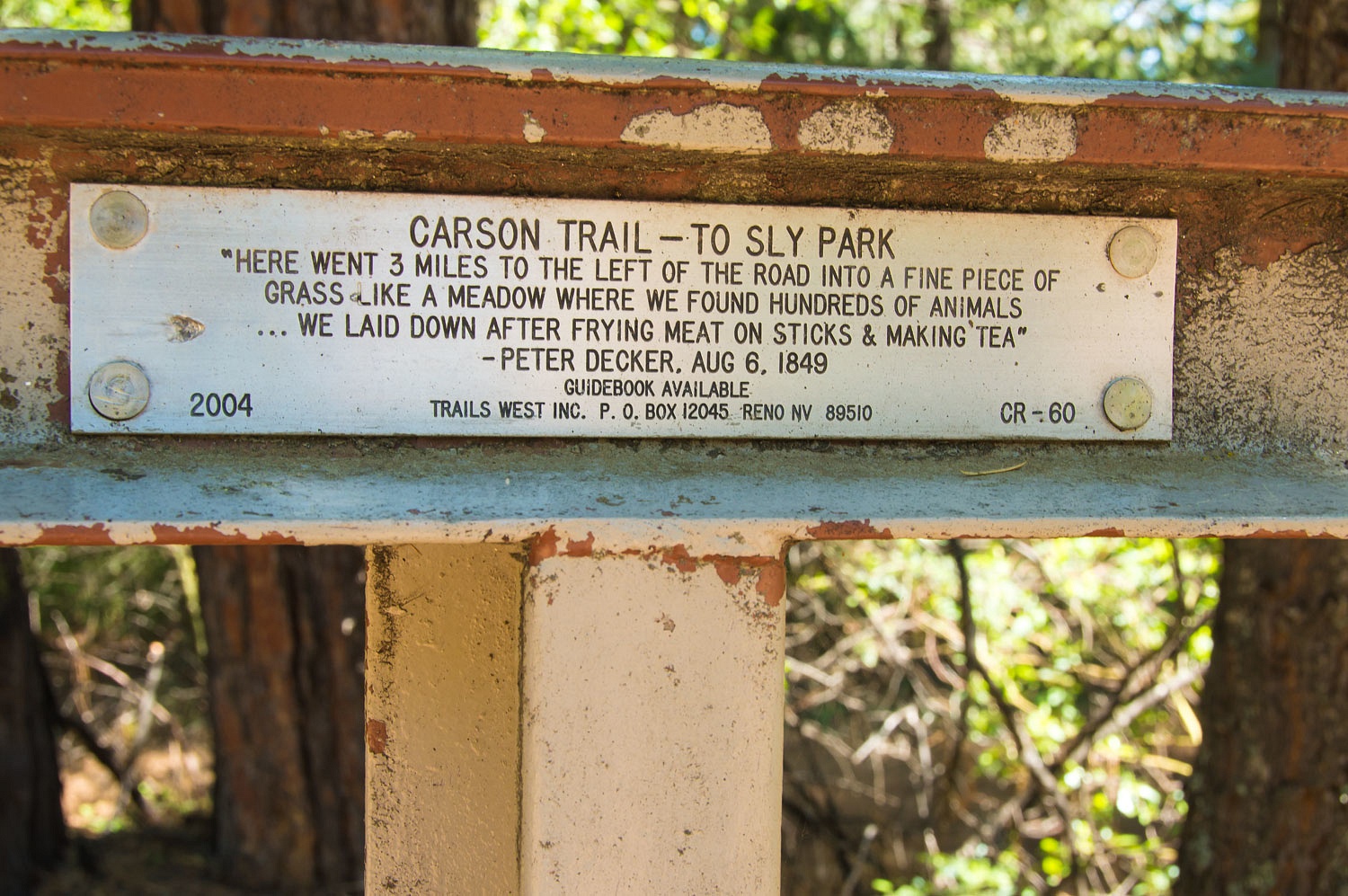 Sly Park was a large meadow emigrants would drop down to for water and forage. The area is now dammed and flooded by Jenkinson Reservoir.


The next three markers are so close to home we can walk to them.

The first is a trail junction on Union Hill. 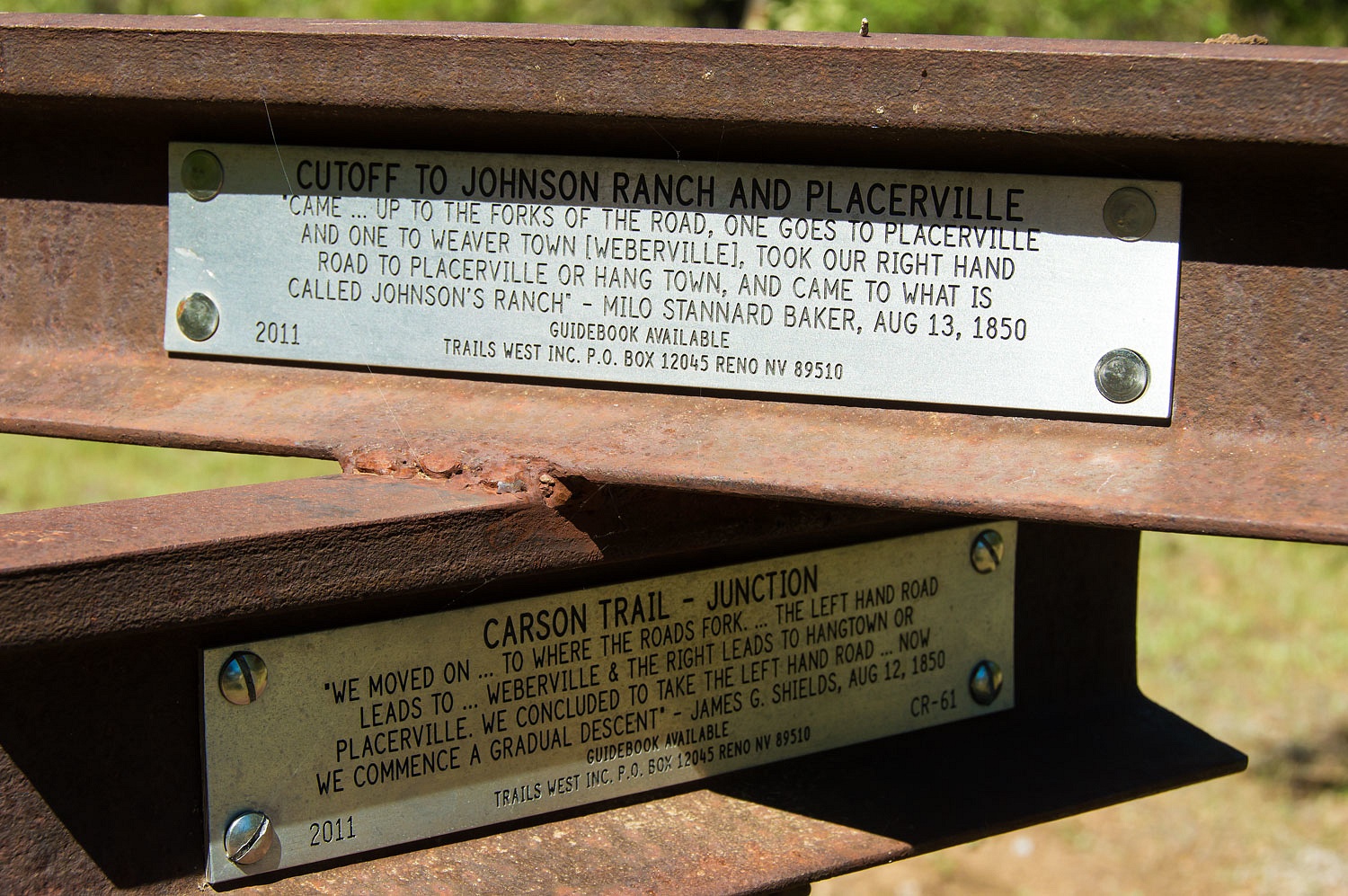 The left route was the original trail down to Pleasant Valley and on to Placerville. The right route intersected with the Johnson Cutoff which ran down Union Ridge to Placerville. 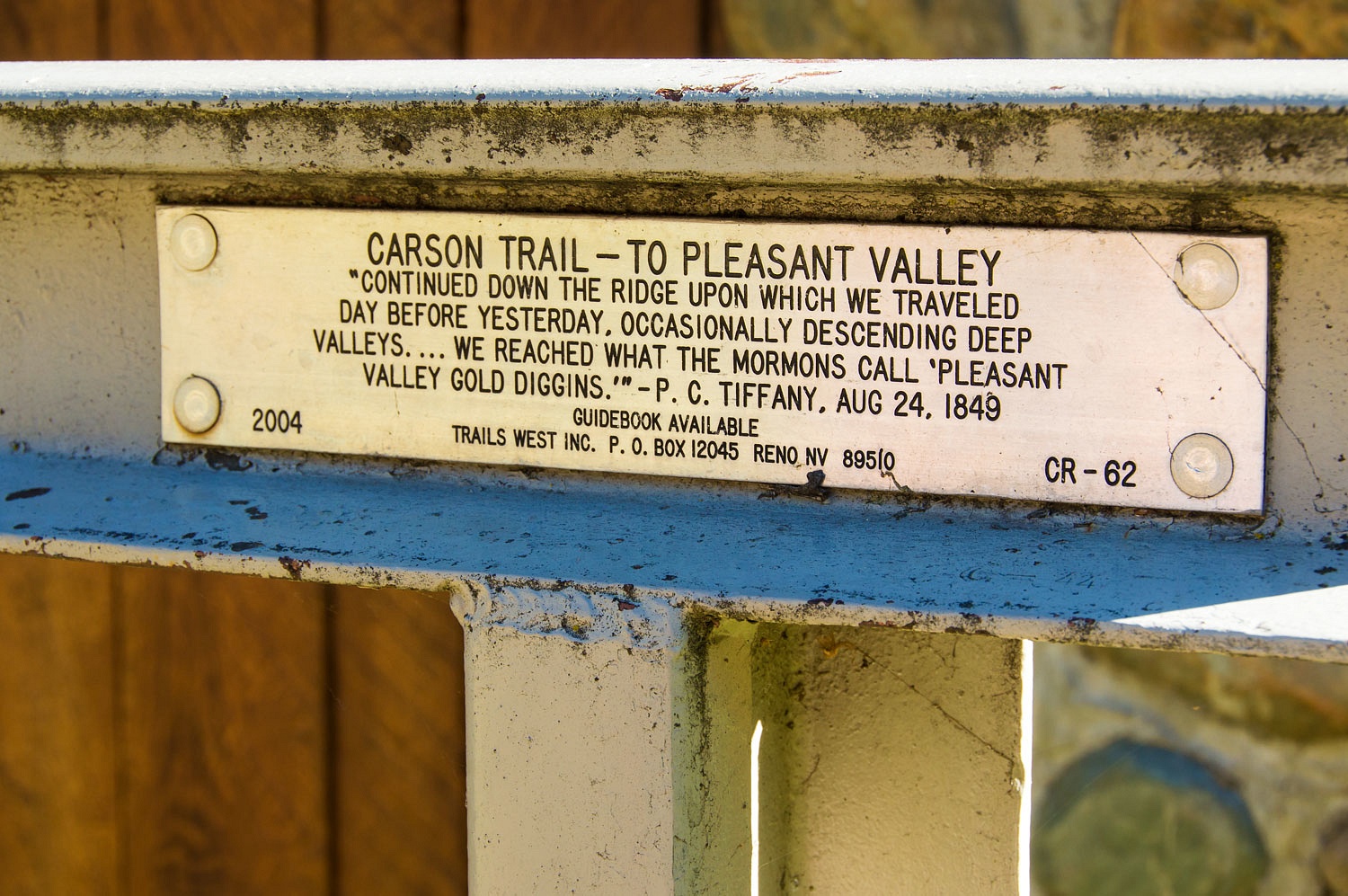 Just beyond our local Safeway market on Pony Express Trail is the last marker we visited on our short afternoon adventure. 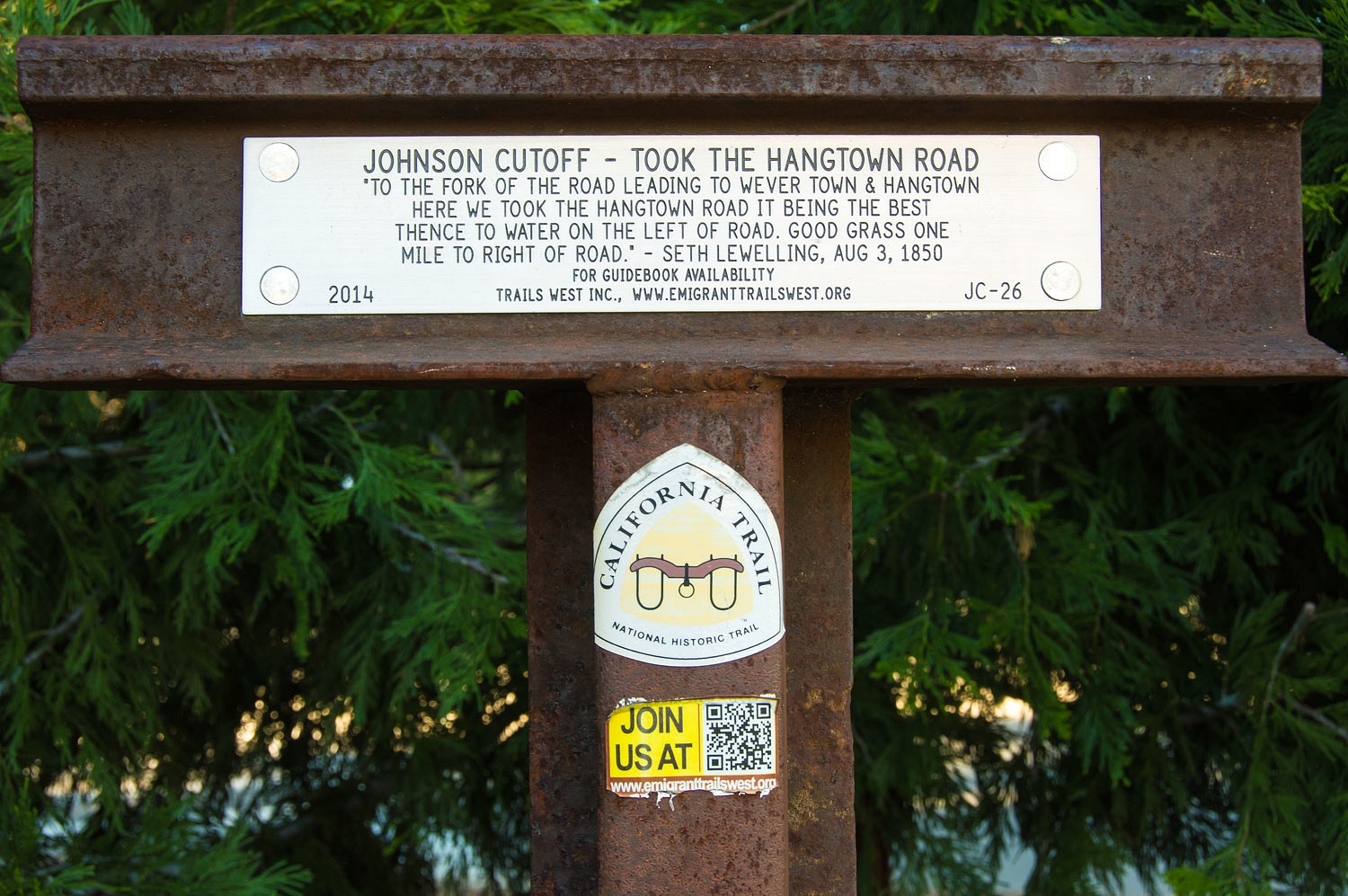 In the mid 1850's the Johnson Cutoff became the most traveled route into  California. It left the Carson Route near Carson City, climbed up into the Lake Tahoe Basin, and crossed the Sierra crest at Johnson Pass (modern day Echo Summit) and descended to Placerville. Johnson Pass was 2000 feet lower than West Pass on the Carson Route. The Johnson Cutoff became the major freight route to Nevada's famous Comstock Lode and Virginia City. It also became the route of the short lived Pony Express.


Near the last marker is the kiosk commemorating the famous Bullion Bend Stage Robbery.


The actual site of the robbery is about a half mile to the east. Confederate loyalists stole Comstock silver and gold in a last ditch effort to save the Confederate States war efforts. The first - and only until recent times - El Dorado County Deputy Sheriff was killed in the line of duty at the subsequent shoot out at the Somerset House. Many still believe buried loot from this robbery is still out there waiting to be found. It's a fun thought, but if I believed that, I'd be looking for it.


We are blessed to have so much history within a half hour drive from our home. So, this is how we spent our first non essential travel. Stay safe, wear face masks, wash your hands, limit contact with others. Look out for yourselves. Be diligent. We are not in this together.

Ski3pin
"And in the end, it's not the years in your life that count. It's the life in your years." Abraham Lincoln